“Don’t judge my path, if you haven’t walked my journey”.  This quote really sums up what I am going to write about.  We all make judgments about others every day.  We like to think that we don’t, but the fact is, we do.  It comes very naturally to us.  One great thing about motherhood is that it's made me less judgmental of others.

I think that being judgmental and pass remarkable are identical sisters.  Both are not nice traits.  I was shopping in Walmart a few months back and I kept running into the same family along each aisle.  A father, mother, a couple of children which included a small baby.  The father, from what I seen and heard, wasn’t a nice character and was talking down to his wife.  See I already have made a judgement.  Their baby began to wail pretty loudly, as babies do so well.  An older Lady passed and I heard her say to her companion very loudly so the mother could hear “she should feed that baby.”  Number one - who are you?   Number two – it's none of your business and number three – why do you feel the need to say something?  Sometimes people should just keep their thoughts to themselves.  The mother was having a hard enough time with her husband, trying to shop and having all her kids with her including an unsettled baby.  Perhaps the child was teething or had wind?  My point is it wasn’t appropriate for the stranger to interfere.

Last summer, myself, my husband and our three kids went to Jasper for the weekend.  We had spent a wonderful afternoon on one of the Lakes.  Our youngest was around the 18 month mark at the time and suddenly got very tired and unsettled.  He was in his stroller and basically had a major meltdown.  He inhaled a large breath and exhaled a HUGE LONG WAIL.  He was loud.  We were on the waterfront and there were a few wedding ceremonies taking place.  Luckily he didn’t seem to have had any impact on the vows.  I continued to walk in order to settle him down and aide him to sleep.  He fought loudly.  One lady sitting on a plastic sun chair gazing out at the lake, turned and stared, not pleasantly.  She was put out by a baby’s scream.  I thought her head was going to do a 360 degree turn.  I used my filter and ignored her.  I continued in my plight to pacify Ryan.  Further down the walking trail, Ryan still making noise, another lady, around the same age as the previous lady, looked at me and gave an encouraging smile.  It was the "been there and done that” smile with a sprinkling of sympathy in her eyes.  Two very different experiences in a very short time frame.

We live in a very cold climate which reminds me of Arondale in the movie Frozen.  Sometimes you have to make decisions that others may judge not to be sensible.  When it is -20 out and I need to get a basic item like bread, am I going to drag all three of my children out of the minivan and in to the bakery?  No I am not.  I ensure I park right outside and can see my van through the glass front.  They are safe and I have a full visual.  I am not a bad parent.  When my two kids were in preschool last year, I  left my sleeping baby in a warm car on occasions for the short time it was going to take me to drop them off.  I weighed the pros and cons of the situation.  Was it fair for me to wake up a sleeping baby when I didn’t really need to and I was leaving him for a short time in a safe warm environment?  Did I want to have to make this decision, no, I had to.  Big difference.

A friend of mine whom has 2 young boys was recently judged harshly by a complete stranger.  Our local library has a number of short term parking spots to allow customers to return their books to the drop off box located in a chute outside the facility.  It was a miserable day weather wise and she made the sensible decision to leave the boys in the car for the sixty seconds it was going to take her to run (because we always do) to the drop off box.   Her car is in her line of sight.  On her way back to her car, an elderly lady accosts her and asks her “did you leave your children alone in your car?”  When she told me this story I was horrified.  I would have done the same thing.  She made a judgement call and ensured her kids were safe.  She is a wonderful mother who puts her heart and soul into raising her kids.  Her boys couldn’t have asked for a better mother but again some stranger felt the need to make a judgment according to…… herself.  My friend is not one for arguing or confrontation so she walked away hurt by this event.  I was also hurt for her.

I also have a friend who has two young children aged three and two.  A few months ago the whole family went grocery shopping on a Saturday afternoon.  Her daughter was misbehaving (she kept running away from her parents) and had been given her final warning.   My friend continued shopping with the youngest and her husband brought their daughter out to the car where they would wait.  On the way to the car, their daughter had a meltdown and was kicking and screaming in her father’s arms.  He didn’t want to let her down in a car park as he feared she would run into a car.  When he got his daughter to the car, she was obviously going to refuse to get into the car seat and she turned into a child contortionist and fought him tooth and nail by arching her back and making it very difficult for him to strap her in.  Unbeknownst to him he was been watched.  Suddenly a police officer was at the car and asking him to step out as he had been accused of shaking the child and taking her.   Up to the police element this story is not uncommon to my own life.  I am still horrified at what took place.  The outcome is that my friend’s husband was told to be careful in public places.  It didn’t stop there.  Child services then called and asked if they needed any parenting help and they were asked how they discipline their children.  My friend feels this might never have happened if she was carrying her daughter out in the exact same manner and perhaps she is right.  There are lots of angles to look at this story from.  I am looking at it from a mother.  I am sorry that my friend had to endure this.  If this was my story, it would have scarred me for life, no bones about it.  You would need to have very thick skin to bounce back from this one.  People are so quick to judge.  I have three small kids so I have numerous public meltdown stories, but I hope to never have one as extreme and painful as this one.

Another friend recently told me this story.  She was in a store on a busy Saturday & there was a lady with a crying baby.  The baby had being crying for a while as babies do.  A lady approached the mother and told her that she should basically bring her baby home.  This person’s retail experience was being affected.  This poor mother probably just wanted to feel “normal” again for a few minutes and go shopping.  An unkind stranger shattered her little bit of sanity.  Did she need to interfere?  Absolutely not.  However, this is becoming a very worrying trend in our society.

Let’s not be so quick to judge others.  Everybody has a different story to tell.  As a mother it is important to develop a thick skin, use your judgement filter and believe in yourself.  Some people just love to see the negative side of things.  A few months back, I was in Costco with my three kids and as I left, this stranger came up to me and told me I was a wonderful mother and doing a great job.  I was been watched but I was positively judged.  We need more of that.  Next time you see a mother or father doing an awesome job, tell them. 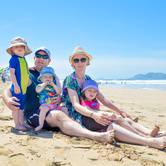 What a wonderful story. I loved the way you started out by saying, "See? I have made a judgment already."

This is a great reminder that we all judge, each and every day. We judge favorably and unfavorably, accurately and inaccurately. My heart goes out to everyone, no matter what side they're on. In the case of the police approaching that poor daddy, I'm sure that a lot of mothers would have been overjoyed if observers had called the police when their children were taken. No matter what side you're on, life is hard and we're all going to go through a lot.

Just today, I was thinking about some of the stupid things I said, did, and thought. I hope that when I speak up about anything, it is 99% out of concern and compassion. Even if a mom is being really nasty to a kid, and I don't approve the behavior, I can sure identify with the horrifying day she must have been having! Sometimes just a smile or a look, as you describe, can communicate compassion.

This is a great reminder that we all judge, every day, whether for better or worse. I appreciate your reaching out and reminding people that they don't have all the details and that things are not always what they seem.