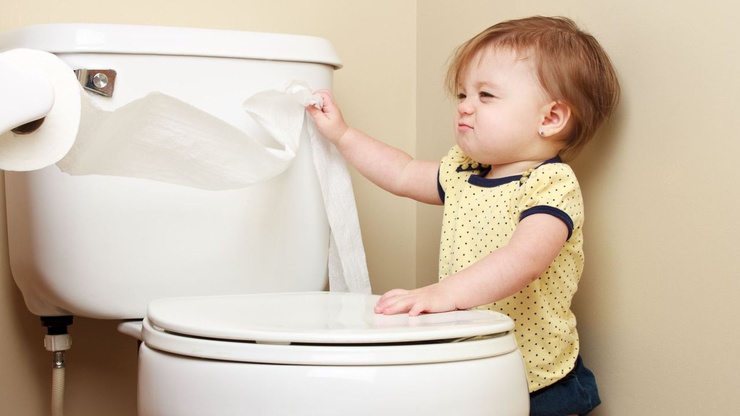 How to Get Your Kids to Remember to Flush the Toilet

Do you have a child who is potty trained, but still forgets to actually flush the toilet? A tag team of terrific parents have chirped in to help us learn how to make you kids remember to flush.

Recently, we had a concerned parent call out to all ChatterBlock users for some serious assistance.

The question was simple, but oh so important.

She wanted to know how she could get her two year old daughter to remember to flush the toilet! After all, there is nothing more offensive than going to the washroom to find that the toilet hasn't been flushed. Ahhh.

Days later we were overwhelmed with response from the community!

Everyone at ChatterBlock wanted to make sure that we published these fantastic words of wisdom, so that all current and future parents would know how to deal with this, well... sh*tty situation.

Our first response was from Natasha, and this was by far the most who wrote:

I have a 7-year-old son who struggles with remembering to flush...he's just so go-go-go that he just skips right over that step and is already onto the next thing! Needless to say, getting him to wash his hands was the first battle but I used the same tactics in getting him to both wash his hands AND flush the toilet.

You must have persistence. And an ABSOLUTE refusal to do the work for her.
One thing we parents tend to screw up, is thinking that consequences have to be painful (of heart or physical body). But the truth is, a good consequence is one that is **inconvenient** and that **naturally relates** to the offence.

This is because both inconvenient and natural/relatable consequences will be remembered the next time they are in the same situation. Inconvenience works because we are creatures who strive for the path of least resistance and don't like to be inconvenienced. Natural consequences work because when our consequence directly relates to the offence, the child can easily make the connection between cause and effect.

EXAMPLE: Taking a toy away from a child who misbehaved in the grocery store does nothing for changing that child's behaviour -- there was no direct correlation between cause and effect and they were left feeling punished for being a failure. Instead, a natural consequence would be that when they misbehave in the grocery store, Mom puts back their favourite snack that they were going to get that week. The consequence is closely linked to the ACTUAL point of offence (the grocery store) so the child will surely remember it the next time you're in the store and they're hoping for their favourite snack to end up in the cart!

So anyway -- what about some practical examples of this for your situation?
In this case, every time you find the toilet unflushed, you can provide her with both an INCONVENIENT consequence and a RELATABLE consequence -- and you need to REFUSE to do the work for her! These next few steps might take a lot of time for you to implement, but it will only happen a few times and she'll be trained. It pays off in the long run!

Do that a few times and she'll be so pissed off for having to do it all that the next time she goes to leave the bathroom, she'll flush for sure! :)

This response was a huge hit and definitely covers the bases.

Another common theme was about finding the proper motivations for your young ones:

I had this problem with my boys and tried EVERYTHING, including what the poster said about having them stop what they are doing to flush.

What finally worked was I said for every unflushed toilet I found I was docking each of their allowances $1 as I didn't know who did it. I had to do this ONCE and the problem stopped.

That day I learned how money motivates my children.

Would money motivate your child? We think this may work well with slightly older kids but likely not with young ones as they may not understand the concept of money.

But of course, parents came to rescue to offer other motivations:

I think some punishment would be good in this situation. Not the big one, but, f.e. if your kid forgets to flush the toilet - he doesn't get something delicious or he can't play video games or something. That would really motivate him to not forget.

The motivation factor that really stole though show was a little unusual.

My son often wouldn't flush...and this also showed that he wasn't always..er...wiping. Same age at the time. It was a bit harsh, but I took a fluorescent shoelace, looped it through a roll of toilet paper and hung it on the bathroom knob. I told him if he couldn't remember to flush/wipe after all my verbal reminders then he would have to wear the TP necklace to school.

He became a #2 flusher after that.

Ha! While funny, we can't fully decide weather it's genius, or cruel.

Negative reinforcement can definitely work in these situations, however, we know there are parents who prefer to take a different strategy.

The important part is finding what works for you and your child, there is no one size fits all. In many cases it may be necessary to try a few different tactics until they are flushing consistently.

On a brighter side however, many responses were humorous, with a touch of helpful.

My daughter came home from a play date singing "if it's yellow let it mellow, but if it's brown flush it down."

My daughter read it on a sign that hung on her friend's bathroom door that her friend had made (aged 8).

All my girls know this catchy little tune from school so I have just assumed it is a new green perspective on conserving water. Ohhh, young kids today!

Oh and, speaking of signs...

"Have lots of fun in the Baja sun but never flush number one.
If it's number two you have to do, flush that puppy and it's paper too."

We even had a grandma join in the conversation with her two cents:

I used to yell "look behind you when you're done" to my kids when the went into the bathroom. Can't recall if it worked or not; but they would have to go and flush immediately that I noticed it. When my grandbabies don't flush I just flush for them. Go figure!

Hope one of these strategies works for you, and at the very least, gave you a bit of a chuckle.

There is certainly light at the end of this tunnel, it just takes patience and practice.

Planning for Coronavirus Covid-19 for my Family
The coronavirus is spreading quickly. ChatterBlock researched the latest information on...
Thanksgiving Leftover Recipes for Kids
Looking for fun and kid friendly ways to use up your Thanksgiving leftovers? Check out ...
Get FREE Slurpees Next Week at all 7-Elevens Across the Country
Enjoy your free Slurpee to celebrate 7-Eleven's 50th birthday! Head to your local 7-Ele...

3 Indoor Activities You Have To Try With Your Kids
You can bring excitement right into your home with any of these 3 cool indoor activitie...
See All Articles
The best of Charlotte, straight to your inbox.